I cannot think very long about aesthetics without encountering the concept of kitsch. Perhaps doubly so now in the Christmas season (on which more in coming weeks), but in the rest of the year at all. One of the reasons I haven’t thought that much about aesthetics, I realize, is that I suspect most modern thinkers on the subject would consider many of my favourite artistic creations bad art – if they would consider them art at all. And the concept which would typically be used to describe them is kitsch: works with a lower-class popular appeal.

Among my favourite works of music are several power ballads of the late ’80s and early ’90s, which I enjoy non-ironically. In visual art, I love the bright Indian aesthetic in its popular manifestations: poster art of deities, temples covered in “Christmas” lights.

I even have a fondness for a certain painter whose work is enormously popular, yet near-universally reviled in art circles: the late Thomas Kinkade. One would strain credibility to deny that Kinkade’s works are kitsch. 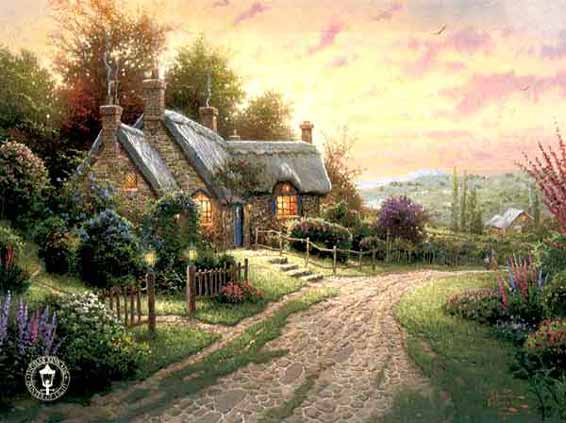 For those unfamiliar with them, Kinkade’s works depict human-built landscapes with no humans in them, filled with light in a pastel glow that often derives from a sunrise or a sunset. They are very well marketed and, I am told, not particularly original in style or content. They are, at the least, very pleasant to look at, very nice. But most discussions I’ve observed of Kinkade’s art, in print or in person, have been full of bile and contempt, to the point that I feel quite reluctant to admit my liking it in a public forum.

The interesting question is: why? It is a question to be asked on both sides. What is appealing about kitsch, like Kinkade’s art, and why does it arouse such hatred?

The most powerful critique of kitsch I know comes from the Czech novelist Milan Kundera, in the sixth chapter of his philosophical novel The Unbearable Lightness of Being. For Kundera, what kitsch expresses, effectively, is a refusal to face the problem of bad: “kitsch is the absolute denial of shit, in both the literal and figurative senses of the word; kitsch excludes everything from its purview which is essentially unacceptable in human existence.” (248)

The problem with kitsch, for Kundera, is that what it depicts is false. In a Kinkade painting, nothing that is depicted is bad. It matters here that Kinkade was a devout Christian. Kundera introduces his discussion of kitsch as follows:

Behind all the European faiths, religious and political, we find the first chapter of Genesis, which tells us that the world was created properly, that human existence is good, and that we are theerefore entitled to multiply. Let us call this basic faith a categorical agreement with being. (248, emphasis in original)

Kitsch, in turn, is “the aesthetic ideal of the categorical agreement with being”: it is a world in which everything bad is systematically excluded. Not merely the evil or even the ignorant, but the ugly and the disgusting, are all whitewashed away. The world depicted by kitsch cannot be the real world.

Kitsch is a fiction, then, but not merely that. That kitsch is fiction (and in that sense perhaps technically a lie) cannot itself be the problem (as was the case with the ethics of Santa). For Kundera, of course, is himself writing fiction – and in a way more self-aware and self-referential than most. But fiction, in telling us a story that did not happen, nevertheless typically tries to tell us something about the real world as well. Kundera’s objection to kitsch, as I understand it, is that not that the fictions it tells are themselves false, but that those fictions make false claims about the real world. And dangerously so, in that those fictions can be (and are) exploited by politicians on all sides.

If the issue is put in those terms, then the question of kitsch seems to come down to a basic philosophical question: truth or happiness? Kitsch buys happiness at the expense of truth. There is no question that kitsch is beautiful if one defines beauty simply as that which gives pleasure. (Which, in turn, leads to the claim that beauty is in the eye of the beholder.) But if that is so, many will quite reasonably object either to the definition of beauty, or to beauty itself thus defined. I have argued myself that there is more to life than pleasure.

But is that to say that pleasure should have no role in a good human life? That too is surely false. Even Kant, so often mocked as an advocate of austere misery, argued that it is a duty to preserve one’s own happiness; the ascetic Buddhists argue for their asceticism at least in part on the grounds that everyday life is dukkha, which has at least the connotation of unpleasure.

Kitsch makes at least one kind of happiness. For Kundera, it would seem, the cost of that happiness is too high – in truth and in politics. And I disagree with such an approach. The lesson of Indian kitsch is perhaps instructive here – perhaps above all in the aesthetic of smell (a phenomenon studied by my friend James McHugh). No visitor to modern India can escape noticing how strongly it smells – both good and bad. Incense and perfume fill the air, as do the delicious smells of street vendors’ food – and probably even more so, the smells of exhaust fumes and, indeed, of shit. It seems to me that there is much in popular Indian art that denies shit – but why shouldn’t it? The shit is all out there in the world around them. Why put it in the art?

In my view, truth and happiness are both goods in life. And for that reason I think there is a healthy place for kitsch – as long as kitsch stays in that place. By all means escape to a fantasy world where things are more pleasant, but don’t let this blind you to the real world. There’s nothing wrong with having a Kinkade on your wall – if another wall has a Bosch.